AS WE LAUNCH THE TRIENNALEby Fram Kitagawa

Oku-Noto is the name given to the northern area of the Noto Peninsula on the northern coast of Japan. The city of Suzu is located at the point where the warm current (kuroshio) and cold current (oyashio) in the Sea of Japan meet. The region has a unique geography bounded by the sotoura (“outer harbor”) to the north and uchiura (“inner bay”) to the south. It is blessed with a verdant natural landscape, where diverse flora from both eastern and western regions of Japan co-exist, nourished by seasonal winds from the continent laden with moisture. Suzu flourished as an important port when maritime trade across the Sea of Japan was active, including Japanese missions to Tang China, official envoys from Bokkai, and the routes plied by kitamae-bune, the freight ships of the Edo-period. However, when the means of transportation shifted from sea to land, Suzu’s location became a disadvantage, leading to decline and depopulation. The current population of 15,000 is less than half of the figure in 1954 (38,000) when the city was established.
Suzu would be regarded as one of the most isolated places in Japan according to the dominant values of today. However, it remains a fount of Japanese culture where various cultures dispersed across Japan have accumulated over generations, as seen in its festivals and rituals, such as kiriko (giant lanterns), festival floats, and yobare (inviting families, friends and neighbours to feasts on festival days). Paradoxical as it may sound, it is this uniqueness that gives this place the quality of a singularity capable of bearing hope for our contemporary era.
“SUZU 2017: Oku-Noto Triennale” aims to be an unprecedented festival in which participating artists can rediscover the charm of the place, its patterns of life and its people, while engaging locals and supporters from elsewhere. Artworks installed across the region, from the sotoura to the uchiura, will not only show a new way to explore the Oku-Noto cape, but also suggest future directions for the oyashio-culture, including a relationship between the Japanese archipelago and the continent. Local delicacies from the sea and mountains prepared according to traditional recipes; kiriko lanterns which are believed to relate to sea spirits; suzuyaki (unglazed ware) pottery, agehama-style salt fields (artificially flooded saltpans set above the high-tide mark), and Noto-gawara (Noto roofing tiles) – all of these distinctive things encountered and experienced here remind us of the foundational layers of Japanese culture.
This archetype of Japanese culture preserved in Suzu presents a forgotten Japan of profound significance for the current era, when we must consider the foundation and future of Japan in the face of global environmental issues and the corruption of ethical values within capitalism. Let’s create an art festival where traditional culture resonates with contemporary art. 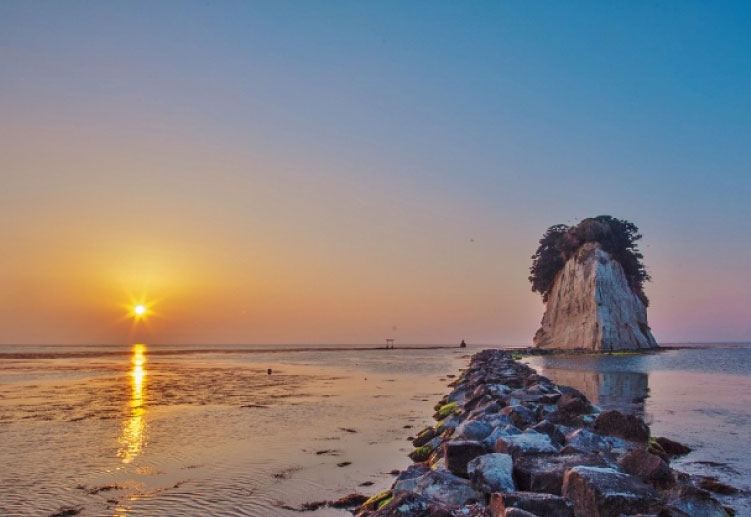 A strange-shaped rock, “Mitsukejima”, one of the symbols of the Noto Peninsula 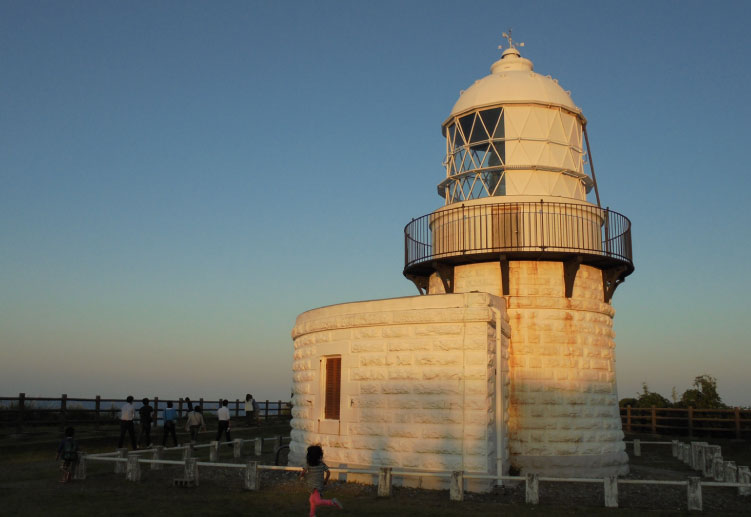 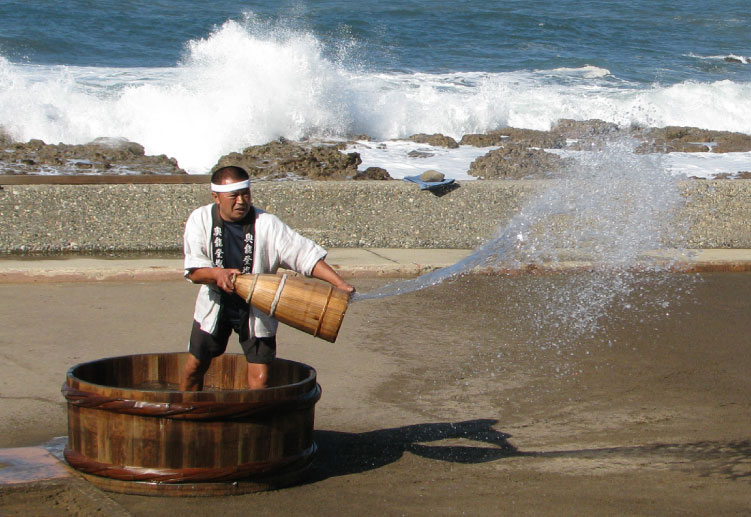 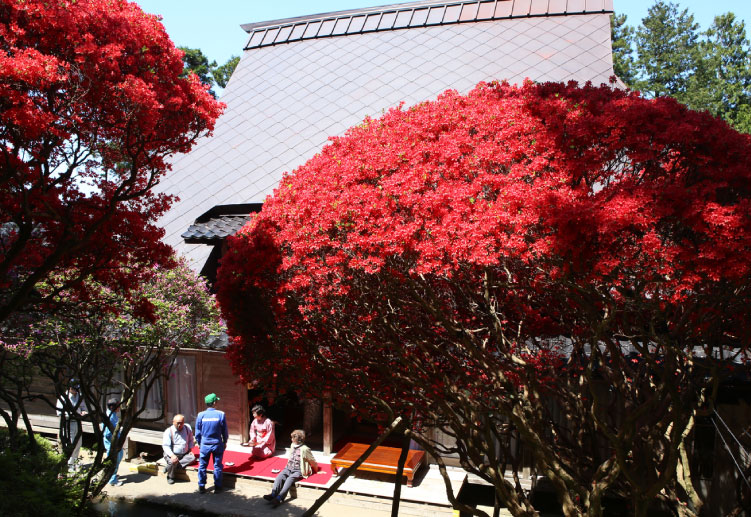 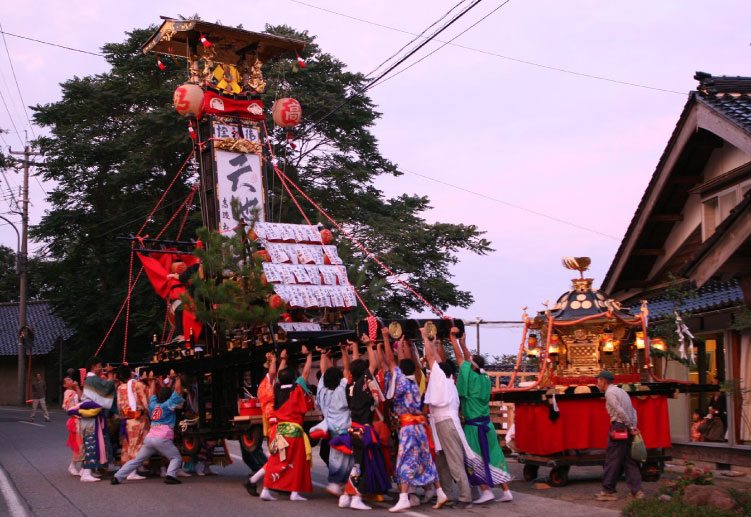 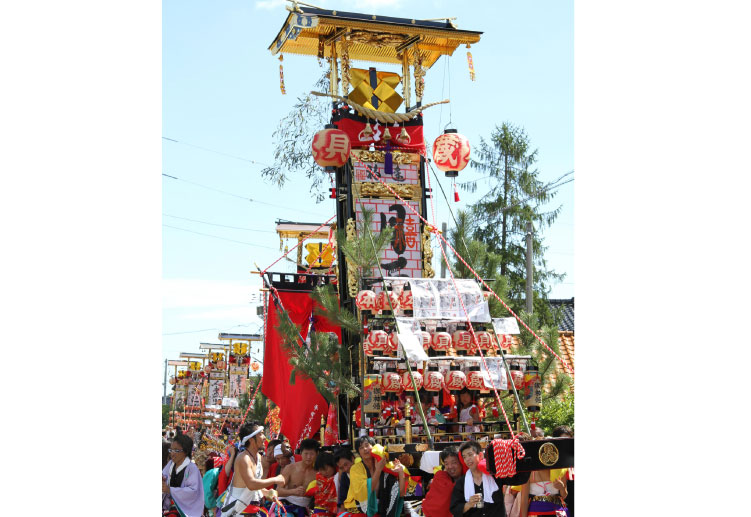 “Kiriko” carried out as a guiding light of mikoshi (portable shrine) 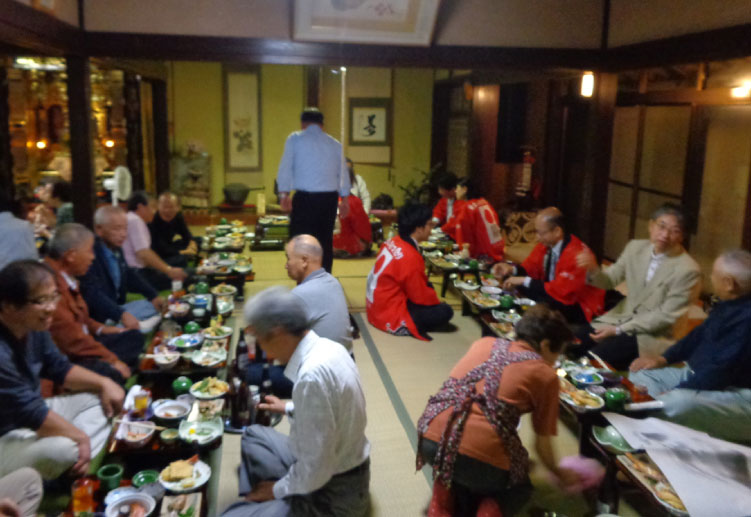 “Yobare”,welcoming relative and friends with feast 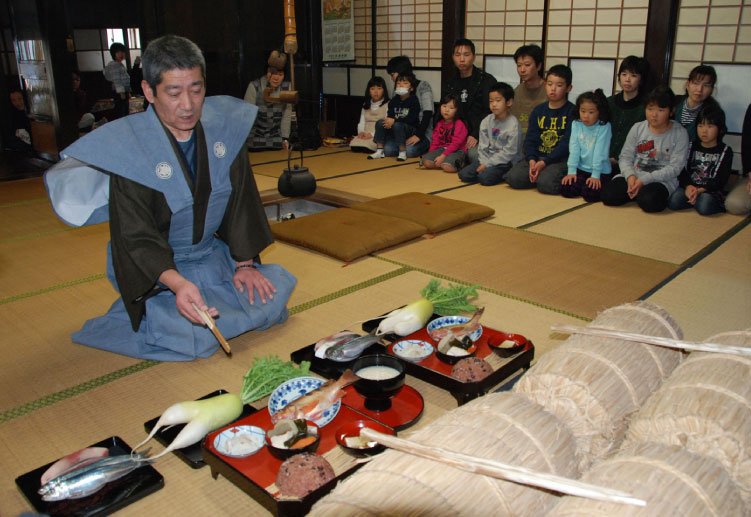 “Aenokoto”, a welcoming of the god of rice field

Suzu City is located at the tip of the Noto Peninsula and surrounded by the sea where the cold current from the north and warm current from the south meet. The city enjoys beautiful natural landscape represented by the outer sea with reefs and the inner sea with sandy beach and gentle waves. Streets are filled with traditional houses with kuro-gawara (black roof tiles) with timber walls, reminding visitors of the origin of Japanese landscape.
Some of the local cultures are distinctive and have been nurtured in the rich environment. Culture of “festival” and “food” represented in “Autumn festival of Oku-Noto Suzu and Yobare” and agricultural rituals “aenokoto” has been passed onto generations. Traditional crafts and industries such as agehama-style salt, Suzu earthenware, Shichirin: metal-made portable stove made of diatom earth have been carefully inherited over generations. Such traditional techniques and agricultural rituals and rich landscape of Noto has been selected as GIAHS (Globally Important Agricultural Heritage) in 2011.
Each village in Suzu City holds “village festival” to pray and celebrate gokokuhojo (bumper crop) in spring, summer and autumn. During 50 days from early September to the end of October in the autumn in particular, there is always a festival every day at different villages across the city. At the festival, people carry more than 100 of “Kiriko” as guiding light of a potable shrine. “Yobare” is a custom which masters of houses serve meals over sake with people carrying Kiriko. “Yobare” is important element of most of the festival across the city and people welcome families and friends with feast. We could say that the origin of “omotenashi” culture in Japan still exists in Suzu-city. This “Oku-Noto Suzu autumn festival and yobare” received the 19th of Furusato Event Grand-Prix by Minister of Internal Affairs and Communications. “Atari Mau Hanto Noto Nekkyo no Kiriko Matsuri” was recognised as Japanese Heritage in 2015.
Suzu City is a home of beautiful “Satoyama-Satoumi”, bounty food and most of all, wonderful people where the origin of Japanese festival and food culture has been handed down.

The official project of the Oku-Noto Triennale, “Oku-Note” is a participatory project held coinciding with the Triennale in order to rediscover charms of Oku-Noto. The project welcomes contributions from local residents, visitors, and those who have engaged with Suzu City in Oku-Noto and eventually select the best 100 charms which will be communicated both within and outside Japan.